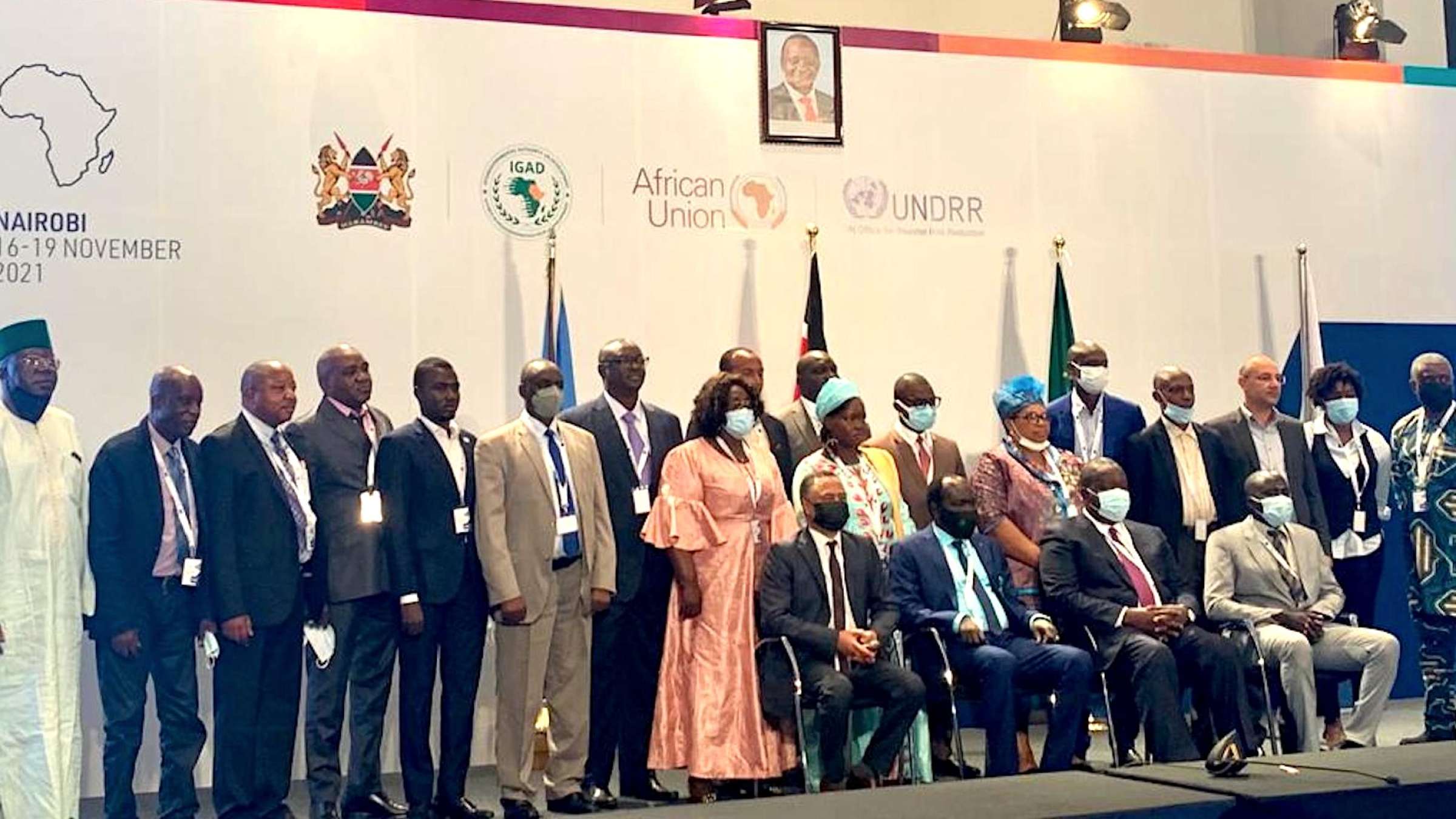 On 19 November 2021, the Seventh High-level Meeting for Disaster Risk Reduction was held in Nairobi, Kenya in hybrid format. Ministers and Delegates from Member States in Africa adopted the Nairobi Declaration and the matrix of the Programme of Action for the implementation of Sendai Framework in Africa (2021-2025). These were the main outcomes of the Eighth Africa Regional Platform for Disaster Risk Reduction (AfRP) that was held from 16-18 November.

The AfRP was hosted by the Government of the Republic of Kenya, under the theme: “Towards Disaster Risk-Informed Development for a Resilient Africa in a COVID-19 Transformed World”.

“It gives me much pleasure to officially welcome you to this High-Level Meeting for Disaster Risk Reduction. The Government of the Republic of Kenya is honoured to host this key Meeting”, said Hon. Dr. Fred Okengo Matiang’I, EGH, Cabinet Secretary, Ministry of Interior and Coordination of National Government, Government of Kenya as he announced the opening of the Seventh High-Level Meeting. “Let us forge ahead to ensure effective risk preparedness in the African region. Many of the challenges we are facing require us to intensify preparedness to deal with risks that are emerging in our environment. Further to this, let us strive to implement the four priorities of the Sendai Framework and the seven Targets of the Sendai Framework as well as the African Union Programme of Action for implementation of the Sendai Framework.”

In her opening remarks, Ms. Mami Mizutori, Special Representative of the Secretary-General for Disaster Risk Reduction, UNDRR expressed her appreciation to the Government of Kenya for hosting the conference, and to the African Union Commission and the Intergovernmental Authority on Development (IGAD) as co-organizers. She stressed that, “international development cooperation and solidarity must be strengthened if we are to recover from the pandemic, fight climate change and address the underlying drivers of disaster risk.”

“Despite progress, disaster risk is on the rise on the continent and continues to undermine development gains. COVID-19 has further heightened the risk. The heightened risks require robust actions that must result in reduced disaster risks and losses by 2030”, emphasized H.E. Amb. Josefa Correia Leonel Sacko, Commissioner for Agriculture, Rural Development, Blue Economy and Sustainable Environment, AUC.

“Climate-induced disasters are becoming prevalent in our region and continent. Disaster risk reduction is consequently a common agenda that demands our collective efforts in the spirit of global solidarity. This, therefore, calls for coherence in policy implementation between the Sendai Framework, the Paris Agreement and SDGs”, stated H.E. Dr. Workneh Gebeyehu, IGAD Executive Secretary. He further underlined IGAD’s commitment to the disaster risk reduction agenda in Africa and urged all stakeholders to act with the sense of unity and urgency.

This High-Level Meeting also featured briefings on the Africa Framework for Multi-Hazard Early Warning Early Action by AUC and the COVID-19 Recovery Framework for Africa by UNDP Africa.

H.E. Ms. Leila Chikhaoui El Mehdaoui, Minister of Environment, Republic of Tunisia, and the Chair of the AfRP Bureau formed at the Sixth High-Level Meeting in Tunis, expressed her appreciation to the Government of Kenya for hosting the Seventh High-Level Meeting. . In the session of election of Bureau, she passed the Chair of the next Bureau to Kenya.

Member States actively engaged in the Africa Regional Platform. Ministers and representatives including those from Comoros, Democratic Republic of Congo, The Gambia, Gabon, Ghana, Guinea-Bissau and Malawi , Mauritius, Rwanda, South Africa, South Sudan, Tunisia, delivered Ministerial Statements to achieve the Sendai Framework on behalf of their governments at the High-level Meeting.

“We must build resilient, sustainable, prosperous, cohesive, connected and climate smart communities. This will capacitate us to build lasting and better solutions to prevent disasters, as well as prepare our communities and equip our citizens to minimise and deal with the aftermath of disasters”, reiterated D​r. Nkosazana Dlamini Zuma ​, Minister of Cooperat​ive Governance and Traditional Affairs, South Africa, in her statement.

The High-Level event adopted that Nairobi Declaration, which demonstrates the strong commitment to disaster risk reduction and resilience building across Africa. It recognizes the achievements Member States and other stakeholders have made in accordance with the Tunis Declaration issued in 2018 and demands action to progress the implementation of Sendai Framework in Africa.

Dr. Stephen Jackson, UN Resident Coordinator for Kenya, delivered seven voluntary commitments, on behalf of UN Kenya, in support of the outcomes of Africa Regional Platform as well as other stakeholders who committed to DRR in Africa.

“I am confident that the new implementation matrix of the Programme of Action and the Nairobi Declaration, will further encourage support from stakeholders”, declared Ms. Mami Mizutori. “The outcomes of this Regional Platform will also feed into the Global Platform for Disaster Risk Reduction hosted by the Government of Indonesia next May.”